Today, I’m starting a new series – interviews with fantasy characters. I’d like to introduce to you Krish, a character from Terry W. Ervin’s novel Flank Hawk. It is the first novel in the First Civilization’s Legacy series. The novel’s genre is post-apocalyptic action-adventure fantasy.

1. Tell me a little about yourself—your name, profession, where you live, do you have a family, the usual.
My name is Krish, son of Thurmuan. My earned mercenary name is Flank Hawk. My family’s home outside of Pine Ridge in the Doran Confederacy was overrun by the forces of the Necromancer King. Now I live wherever my company under the flag of King Tobias camps in the field, as we fight.
I have a father, mother and a younger sister, Katchia. I saw them fleeing our home hours ahead of the coming onslaught of ogres and goblins. My older sister, a healer named Raina, was taken from us several years ago, under the guise of custom and law, by followers of Fendra Jolain, Goddess of Healing. We believe she is in the distant Vinchie Empire.
My older cousin Guzzy and I were farmhands who volunteered to serve in Lord Hingroar’s militia and fend off the annual crop disruption raids sent by the Necromancer King.
I now am a mercenary, serving in the forces of King Tobias of Keessee. I serve to see that my family survives and may one day return home.

2. What happened to you, so you ended up in this crazy adventure the novel talks about?
White Mule Company, my militia company, was overrun by the Necromancer King’s forces. An ogre slew Guzzy during our retreat. Road Toad, an experienced mercenary who’d fought alongside us, took me under his wing. From there I got caught up in a whirlwind of events until wounded Prince Reveron tasked me to find the fabled Colonel of the West. He thrust upon me the royal family’s malevolent Blood Sword to barter with the Colonel for a weapon to thwart the Necromancer King’s victory.

3. What is the worst enemy you’ve ever faced on the battlefield? 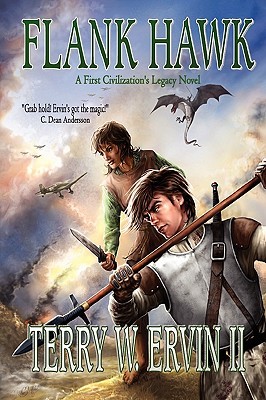 I’ve faced ogres and goblins, sorcerers and necromancers, Stukas and Panzers—war machines resurrected from before First Civilization’s fall. I’ve even faced and stood to the hellcry of a bone golem, a creature built from the bones and sinews of a thousand men and in which beats the heart of a demon. But the worst enemies I’ve faced are zombies. When battling zombies, and they’re overrunning your company, they’re silent—except for the thumps of their fists and tearing with their rotting hands. The only sounds heard are the shouts of your company’s men, the cries of those caught, being pummeled to death or torn apart.
The absolute worst experience is coming face-to-face with an undead foe, one who only days before had been standing in the line next to you—had been a comrade, a friend.

Find the author at:
His website
His blog Up Around the Corner
Flankers – unofficial facebook fan page for readers of the First Civilization’s Legacy series