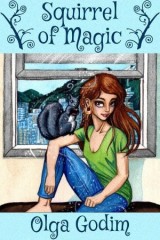 I just published a collection of urban fantasy short stories Squirrel of Magic, on sale now at Smashwords and Amazon. All the stories are united by the same protagonists, young witch Darya and her familiar, squirrel Beatrice. They live in Vancouver, Canada and use Darya’s magic to protect the city from evil. So far, they have disarmed a bomb, thwarted a bank robbery, punished a wife abuser, and rescued a fashion show. And they always help friends in need.
My current project is a novel about young magician Eriale, the protagonist of my novel Almost Adept, which is #1 in the Adept series. The new novel, tentatively called Adept Seaworthy, is #2 in the Adept series. This novel picks up soon after Almost Adept ended. In the new story, Eriale is thrust into a complex scenario involving kidnapping, pirates, an evil mage, and a vendetta between her distant relatives. She has to deal with all those predicaments before she could return home.
I work on this series out of sequence. The first draft of Eriale’s story #3, tentatively titled Adept Meddling, is already written, but I let it lie for a while before I come back to it for revisions. I also have plans for more Darya stories. 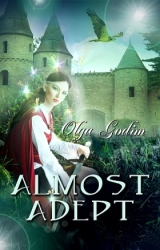 2. How does my work differ from others in its genre?

Many high fantasy writers write about battles, wars, and political machinations. I don’t. Usually, my heroes have smaller obstacles than a power-grabbing maniac bent on world-domination or a global disaster. Instead of saving the world, my protagonists might save a village, or liberate a town, or help a few people who need their help right now. They solve human problems and apply human solutions. My favorite fantasy writer, Sharon Shinn, uses such an approach too. Maybe that’s why I like her books so much.
Of course, there are struggles and confusion in my stories; it’s impossible to write fantasy without at least some kind of violence, but I try to keep it to a minimum. If a non-violent, smart solution could be found, my heroes would find it.

Why do I write fantasy? Obviously, because no research is required. Well, that’s a bit of a joke, but it’s the truth too. I write high fantasy because I can invent a world and all the rules in it, and nobody can naysay me. It’s my world after all. Furthermore, fantasy allows me to escape reality. That’s why I read fantasy and that’s why I write it – escapism pure and simple. I imagine my heroes talented and brave, able and smart. You read about them and you forget (I hope), if even for an hour, that you need dentures you can’t afford, that your bills are overdue, that your boss is an asshole, that your mom is eighty and getting weaker every day, and you’re helplessly watching her slip away. If I can give my readers this tiny escape from their worries, then I’ve done my job as a writer.
As for modern fantasy – those stories just came to me. I didn’t plan to write them. I wrote the first Darya’s story in 2007, as an experiment, and it came out funny. I never considered myself a humor writer, but how could I write about a telepathic squirrel without at least a bit of humor? I liked the squirrel and her witch, and the stories kept coming over the years. I try to make Darya’s solutions as unorthodox as possible. She doesn’t wield a sword in her fight against evil, she wields her wits, and Beatrice helps.

4. How does my writing process work?

I’m a plotter. I need to know what happens with my characters before I write. Often, I have a writer’s block when I don’t know how my hero could extricate himself from this particular quandary, when I back my writing self into a corner. Fortunately, sometimes a story takes over. I would be typing, following my rough outline, and then my hero would meet someone unexpected, have a chat, and the story would veer into an unforeseen direction. Such little detours often enrich my stories and my characters, but I always return to my general outline in the end.
I also need the right names. Selecting a right name for a character is imperative. Sometimes it takes months. I would look through a book of baby names and shuffle letters in the existing names and words. A name must feel right, and it’s an intuitive process. I can’t explain it. I have a draft of a novel where I’m not satisfied with one of the names, and it bothers me. I need to find the right name before I start revisions.

~~~~~~~~~~~~~~
Thank you, Stephanie Joyce Cole, for tagging me for this blog hop. Talking so much about myself is fun. Unfortunately, I didn’t realize at the time I agreed to be a link in this chain how much work it is to find the next links. So far, I’m the last.

Stephanie Joyce Cole lived for decades in Alaska. She and her husband recently relocated to Seattle, Washington, where they live with a predatory but lovable tailless Manx cat named Bruno. Stephanie has an MFA in Fiction Writing from the University of Alaska, Anchorage. When she’s not writing, she’s hiking, creating ceramics, practicing yoga, traveling, volunteering and discovering new ways to have fun–and oh yes, always reading, reading, reading.