My story free on Amazon 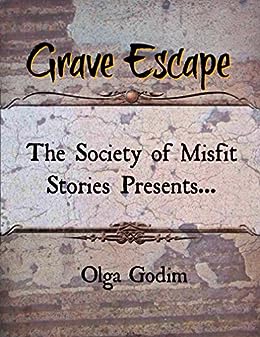 My fantasy novelette Grave Escape, part of the series The Society of Misfit Stories, will be free on Amazon, as Kindle Single, on March 20-24. Afterwards, the publisher, Bards and Sages, will pull it out to include in their upcoming anthology of the entire series.

The blurb on Amazon reads: “How far would you go for your freedom? Two young women, desperate to escape the oppression of those who torture them in order to harness their magical powers, engage in a desperate escape attempt. But when the path to freedom goes through long-forgotten crypts, the destination leads to unexpected revelations.”

Below are the first few paragraphs of the story.
~~~~~~~~~~~~~~~~~~
“Rada, are you coming?” Lonit’s sandy braid swayed against her nun’s robe, as she trotted into the chapel. Her hazel eyes twinkled, belying the dark semicircles beneath.
“I’m done with the fairy tales,” Rada said. Paint still glistened on the last illustration of the manuscript she had just finished copying. She admired her handiwork for a moment before closing it and hobbling to the Nunnery library alcove to put the new book on a shelf.
Lonit settled on the edge of Rada’s desk. “You’re burying yourself in here, among your manuscripts. Come on. It’s sunny outside.” A grin flashed, illuminating her gaunt, pale cheeks.
Rada shook her head and wrapped her shawl tighter around her shoulders. Lonit was nineteen, only a decade younger than herself, but Rada felt ancient beside her friend. “Copying manuscripts is the only thing that keeps me sane in this repulsive place.”
She loathed the Nunnery. She had spent eight years here and still couldn’t get used to it. Every week, when the priests’ odious device gobbled her magic, she wanted to puke.
“I know,” Lonit sad quietly. “I always vomit after they suck out my magic, but what can we do? Might as well smile and make the best of the situation.”
……..

When I write my short stories, I always try to make a cover for each story, even if nobody will ever see it. For me, a cover is a visual representation of the story; it pulls me in. The best covers relay the atmosphere and convey the mood. I often go through a number of images before I hit the perfect one. The publisher’s cover is at the top of this post. They made the entire series visually universal but generic. I wanted to share here my specific cover. It reflects the spirit of the tale and its two heroines wonderfully. You could see their apprehension, feel their love and support for each other. The cover is based on a painting by a Belgian artist Francois Joseph Navez (1787–1869).

4 Responses to My story free on Amazon