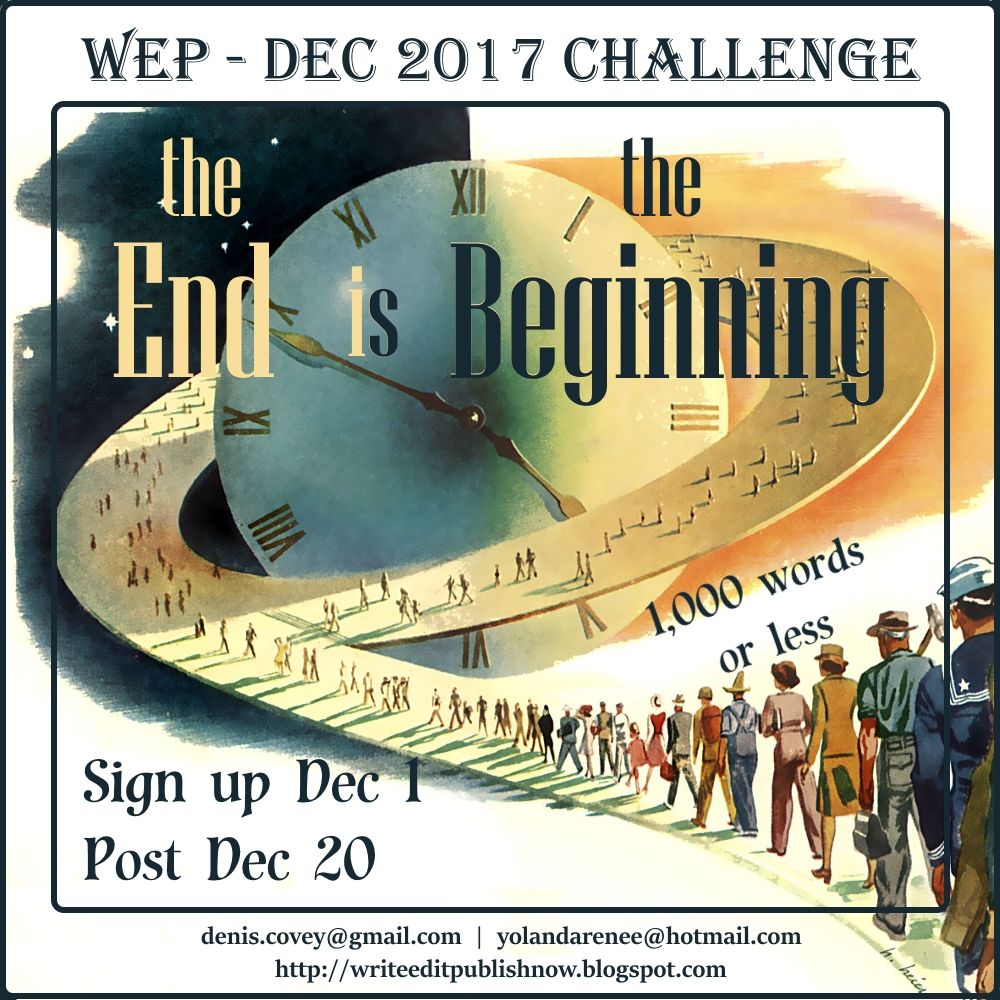 This is the last WEP challenge of the year, The End is the Beginning, and the last of Tasya’s stories. The previous episodes are:

“I missed you so much.” Tasya hugged Misha tightly as soon as he stepped inside the door. He smelled of rain, sweat, and trains. “You have been gone for so long this time. Sometimes it feels like you’ve moved to Voronezh permanently. Your son hardly knows you.” She clung to him, inhaled his beloved scent, and lifted her face for his kiss.

Misha obliged, but he didn’t seem enthusiastic. “I work there,” he murmured. “Sometimes I’m not sure you want me back.”

Alarm bells rang in Tasya’s head. “What do you mean?”

He shook his head and picked up his suitcase. “I’m tired, Tasya. It’s been a long trip. I need to change and wash up.”

“No. Let’s talk. Now. Roma is asleep.” She whirled and led the way to the kitchen.

He followed reluctantly, dragging his feet. He sat down at the kitchen table, put his big hands on top, and faced her, his eyes shuttered and cold.

“What do you mean?” Tasya demanded again. “Did you find someone else in Voronezh?”

“Someone else?” He snorted. “When? I work sixteen hours a day. I only have time to eat and sleep. But you stay here.” He hesitated before continuing. “You’ve changed. Ever since those officers came to arrest me, but didn’t, you’ve become different. You’re hardly ever home, even when I come back. You visit your grandma all the time now. You couldn’t stand the old witch before.”

Of course she had changed. She had been learning magic and saving people from arrests, but Misha had been home so seldom lately. Tasya didn’t think he noticed. Obviously, he did, but what could she say? How to explain magic to an engineer?

“I’m not different,” she stalled. “It’s just… it was time to reconcile with my grandma.”

His gaze sharpened. “Don’t give me crap, Tasya. Tell me the truth. Have you turned an NKVD informer? To protect me? Was that why they didn’t arrest me then?”

Tasya gasped. “No! How could you?”

“What else is there?” he said bleakly. “It’s either that or another man, and I couldn’t believe that of you. And I didn’t get arrested. They take my friends and colleagues but never me. I thought it was because of you, because you traded my freedom for the others.” He sounded so miserable, Tasya’s heart ached.

“Oh, no, Misha. It is because of me, but not the way you think.” She dropped down on a stool across the table from him and put her small palm on his big one. She tried to catch his eyes, but he wouldn’t look at her. His hand tensed under her fingers, and she took a deep breath. She had to try.

“I told you my grandma was a witch. It wasn’t a metaphor. I come from a long line of witches, many generations back. Women in my family have always had magic. So do I. When I joined the Communist Party, just before we met, I renounced my magic. But I couldn’t turn it off completely.”

He finally met her eyes. “Magic?” He still didn’t believe her.

Tasya pressed on. “Magic has two components, active and passive. For years, I didn’t do active magic, no spells or anything. But I’ve always had foresight. I couldn’t shut off the visions. I knew they were going to arrest you, so I decided that my communist principles were less important than your life. I went to beg my grandma for help, but she couldn’t. As we age, our magic dwindles. Hers is practically gone. She said I must do it myself and she gave me the means. The medallion you wear – it’s magical. It protects you. It makes you invisible to your enemies. You will never be arrested. Every time your name comes up in a list or a document somewhere, it gets blotted out or erased. It’s happened twice already. I sensed it: my spell at work.”

Tasya lifted her hand and called the medallion to her. Filled with her magic, it shot out from under his shirt and jacket, tearing off a button in its rush to her hand. Misha jerked, staring at his suddenly animated pendant.

Tasya caressed the little pewter shield, pouring more protective magic into it, before she restored it gently in its place under his shirt.

“Grandma provided me with five such medallions; one for you and the other four. By now, they’re all gone, all found their owners. Four other people are safe from arrests. A mother. An actor. A scientist. And a librarian – my former boss. They are all free because of my magic. I have been learning magic, Misha. That’s why I’m always with my grandma. She might not have much power anymore but she has the knowledge, and I need it. She is fading though. I think she is dying.” Her throat tightened in grief.

“Magic?” He looked like a lost child, not a good look on a man with a two-day stubble.

“Magic,” Tasya confirmed. “I haven’t betrayed anyone, I swear. I want to help more people but I need more medallions to do that.”

“I know.” Tasya circled the table and hugged him from behind.

He covered her hands with his own callused ones. “Do you have a medallion of your own?”

“You should be protected too. I have something for you.” He swallowed audibly and turned to her, his hand diving into his pocket. “I got it right after you gave me my medallion, but then you… we… I wasn’t sure. Would you take it? It doesn’t have any magic, but… please…” He opened his palm, revealing a golden medallion with two interlocked hearts. “I love you.”

“Oh, Misha. It’s lovely. Thank you. I love you too.” Tasya picked up the medallion on its delicate golden chain and put it on. Then she kissed him on the mouth. “I’ll treasure it,” she vowed softly.

“Make it magical too,” he urged against her lips. “You should be safe.”

“And we’ll buy more, for other people, right? Do they have to be gold?”

Tasya couldn’t stop a smile from taking over her face, but her eyes stung from tears. “No. Any metal will do. Crystals work too. You’re wonderful.”

They stayed in each other’s arms for a long time.