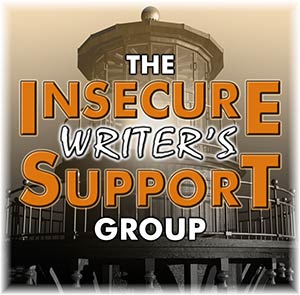 It’s the first Wednesday of the month again, time for a post for the Insecure Writer’s Support Group.
~~~~~~~~~~~~~~~~~~
Today I want to talk about fan fiction. My latest story is fan fiction – it is set in another writer’s universe, specifically, Wen Spencer’s universe of Tinker and the other connected stories of hers. Visitors to my blog might be familiar with my novella Magic Senegalese, set in Spencer’s world. I have been posting it in installments as my WEP entries since the start of this year. Another story of mine, Five Days of Elf, also set in the same universe, is already on Wattpad.

Now a third story, set in the same universe, shimmers in my head, slowly taking shape. What does it say about me as a writer, if the only stories I want to write are based on someone else’s imagination?

I don’t involve the original writer’s characters – I use my own – but the setting, which plays a huge role in all the stories – hers and mine – doesn’t belong to me. Does it make me a plagiarist?

Personally, I think my stories are a tribute to the original writer. After all, they speak of my admiration for her and the world she has created.

I have been turning to Wen Spencer’s books as comfort read in the past few years, and they never failed me, but there is never enough of them, and I’ve read (and re-read) them all at least a couple of times. Some more than twice. They resonate inside me, and I want more stories set in her universe, but what is a writer to do, when no more stories are forthcoming? She creates her own. Right?

Many authors, especially in the speculative fiction genre, start with writing fan fiction, sharpen their skills on it, and then switch to their original writing. I did the opposite. I never wrote fan fiction prior to my first story set in Spencer’s world, Five Days of Elf. There are other writers I love, but I was never tempted to write fan fiction before. This whole situation bothers me. Should I continue writing these stories? Should I contact Spencer about it and ask for permission? Should I resist the temptation?

What do you think? Do you write fan fiction?