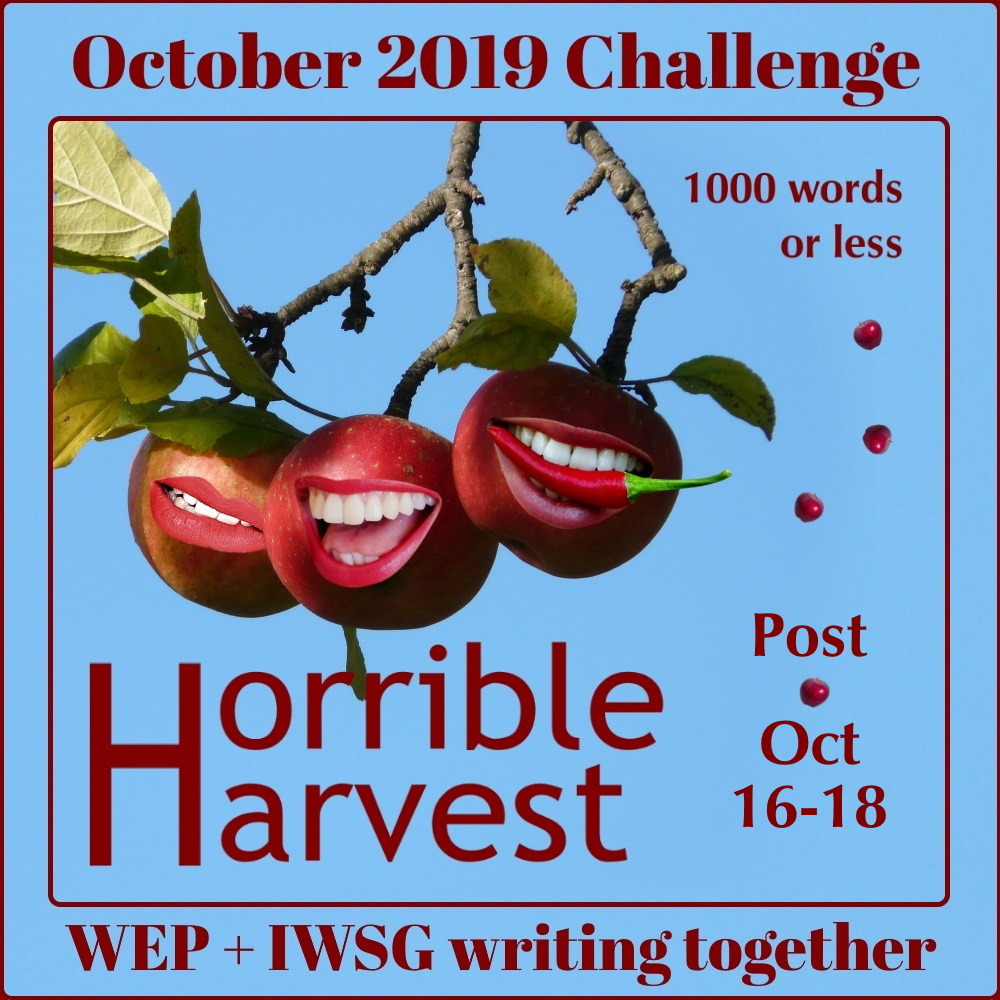 This story about Dinara and her pet shop, Rendezvous Pets, on the Rendezvous Space Station is my entry for the Oct 2019 WEP Challenge. Dinara’s shop is a trusted location for every pet owner on the station, human and alien alike. She guarantees the best care and absolute safety for your pets.
~~~~~~~~~~~~~~~~~~~~
Dinara looked up, as her cousin Manie entered Rendezvous Pets. “Look, Manie, I’ve got a harvest.” Dinara nodded proudly at her new potted plant in the corner. Only yesterday, it had been covered with small, off-white flowers. Now, the tiny shriveled petals littered the floor around the pot. In their places, the oval iridescent berries swayed on thin branches. The tiny fruits sparkled merrily. Her new boarder, a small gray cat, named incongruously Ginger, sat beside the pot, swatting at the berries with deep concentration.

Manie chuckled. “Are they edible?”

“No, purely ornamental. They smell nice.” Dinara sniffed appreciatively. “Ginger likes them too.”

“Someone had a wicked sense of humor naming that cat Ginger.”

“Yep. A Vergacian embassy clerk brought her in yesterday.”

“They don’t. I’m not sure Ginger is happy with her current master. She hissed at it.” Dinara picked up the cat and deposited her into the playpen at the back of the shop. “You stay here, kitty,” she said fondly and locked the pen’s fence. “Drink your milk and play, while I have lunch with Manie.”

Ginger stalked to the saucer of milk and began lapping. With the shop door locked as well, the cat wasn’t going anywhere. The animal was so well-behaved, Dinara let it roam the shop at will.

“Explain to me why a Vergacian would own an Earth cat?” Manie demanded.

“The owner said it wanted to understand humans better, so it got a human pet.”

“A cat?” Manie muttered something uncomplimentary, while Dinara contemplated the Vergacians. After several years of bloody war, the human Federation and the Vergacians had finally signed a peace treaty a year ago. Soon after, the Vergacians opened their embassy on the Rendezvous Space Station.

According to the scientists, Vergacians couldn’t see colors—their eyes were not equipped—so everything about them was gray: their skin, their clothing, their buildings. They were unisexual, propagated by budding, and preferred the pronoun ‘it.’ If a Vergacian decided to have a cat, gray would be the most appropriate color, but the name Ginger was definitely a joke.

An hour later, when they returned to the shop, she couldn’t see Ginger. Nor could she see her plant with its shining berries.

“Hey, where is my beautiful plant? Where is Ginger?” She rounded the desk, glanced down, and felt cold all over.

The pot lay on its side behind the desk, soil spilling out of it. The stem of the plant was broken, and the berries were all gone. Ginger’s inert body slumped beside the ruined plant, a leaf protruding from her mouth.

“No!” Dinara crouched to the cat, but Ginger wasn’t breathing.

“She got out of the playpen, ate the poisoned berries, and died,” Manie said softly.

“What am I going to tell the Vergacian?” Dinara wailed. “Horrible berries! Rendezvous Pets guarantees the safety of every pet, and I let Ginger die. I should’ve kept her locked up while I was gone.”

“Yeah.” Dinara winced. “I need to get a new cat. The Vergacian comes back in a week. If I don’t get a replacement by then, I might lose my license. Or worse, they might start another war.”

“Won’t it notice, if you return a different cat?” Manie asked.

“I hope not. If they don’t see colors… Gosh, Manie. A living creature died on my watch, because of my carelessness.” She put her hands over her face. She wanted to cry. “Ginger was such a nice kitty,” she mumbled into her palms.

She scoured the station net for days, placed an ad in the Rendezvous news sheet, but nothing bit, until one day before the Vergacian was due back.

“You need a cat, lady?” The scruffy old man on the com-link screen wore stained brown coveralls. “I have one for sale.” He cackled and named the price that had Dinara’s head spinning. But she didn’t have a choice. She agreed to meet him at the bottom of the station, where transient workers lived.

He waited for her alone in his dorm, his breath reeking of alcohol and drugs. The cat, a large carroty tom, was weaving his way around the mattresses of the dorm, ignoring the humans.

“I’m leaving for a new work contract in a few days, so you can have the cat,” the man said, “but you pay up first.” He sounded menacing.

“Of course. What is your cat’s name?” Dinara fingered a tranq gun in her pocket. If this man threatened her in any way, she would shoot a tranquillizer dart at him.

He shrugged and leered. “Cat.”

Dinara sighed, put her cat carrier on the floor, and opened it. She had come prepared. A strong aroma of fish and herbs wafted out from the fish cubes in the carrier feeder.

The tom turned, regarded her disdainfully, but came anyway. He stalked into the carrier as if he was doing her a favor. Dinara locked the carrier door and gave the man his credit chip. “The exact price,” she said coldly, picked up the carrier, and left. She hoped she exhibited as much dignity as the new Ginger, but probably not. The new cat was awfully heavy. The man’s guffaw followed her to the lifts. The cat mewed contentedly inside the carrier as he gobbled his fish.

Two days later, after the Vergacian had come and gone with its new cat, Dinara met Manie for lunch again and told her the entire story.

“But this Ginger is male and big,” Manie exclaimed. And ginger. And not nearly as nice as the other Ginger was. Didn’t the owner see the difference?”

“Obviously not.” Dinara smiled. “I was quaking inside, but it just commented on the size. It didn’t notice the color, of course, nor the gender discrepancy. I guess, all alien cats look the same to a Vergacian. I explained that the cat liked the food in my shop so much, it grew bigger. It was satisfied. It even asked me what brand of cat food I used.”