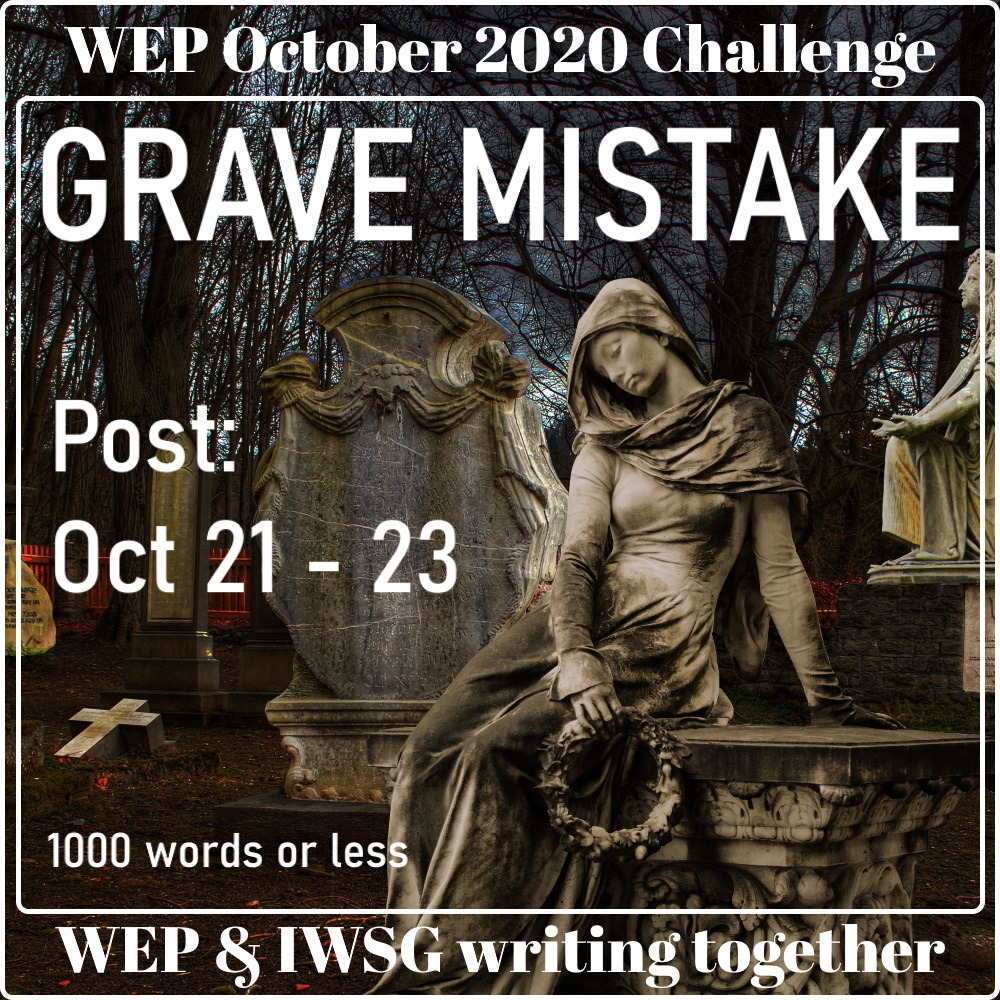 Here is one more story about Monette, the paper mage and owner of the magic agency Small Magics. She operates in the alternative Vancouver, Canada. You can find Monette’s previous magic adventures here:

This story is my entry for the WEP October 2020 challenge.

“What can Small Magics do for you, Mr. Galanis?” Monette asked her visitor.

The man sat in the client chair on the other side of her desk, his dark eyes watchful. “My problem is … unusual,” he said. “I seem to have misplaced my grandfather’s … corpse.” He grimaced apologetically.

“Yes, well. My ancestors came to Canada from Greece a hundred years ago, when the Turks started killing Greeks there.”

“My great-grandfather was a jeweler, but he couldn’t take much with him during their escape. He buried most of his gold and gems and made a map of the location. He took that map with him, together with the ownership documents. He hoped to return to Greece later to retrieve his property, but it never happened. The documents passed on to his son, my grandfather. They should’ve come to my father afterwards. My father and I decided that I should go to Greece next summer and try to find the family treasure. Meanwhile, two weeks ago, my grandfather died. He was almost ninety. My grandma is the same age and …” He signed. “She dressed her husband for the burial in his best suit and put the documents in his inner breast pocket. We didn’t know. We went on with the funeral.”

He snorted. “We have, as soon as we found out. But the problem is – it wasn’t his body inside the coffin. Something went wrong at the funeral house. There were eight funerals that day, all of them in similar coffins, but buried at three different cemeteries. Someone made a mistake. We don’t know where my grandfather is. And we can’t ask to exhume all seven other bodies. Maybe one, if we know for sure, but not all.”

“Of course, not,” Monette said. “But I don’t know what I can do. I’m a paper mage. Maybe someone from a bigger agency would be of more help.”

“I contacted two of the largest magic agencies in Vancouver before I called you,” Galanis said. “They both asked for thirty percent of the cost of recovered jewels on top of their hourly fees. Your website promises flat fees. We are willing to pay a bonus, if we are able to find the jewelry, but thirty percent is too much. Besides, as you say, you’re a paper mage. The documents and the map are paper.”

Monette stared at him. “I need to think,” she said at last.

“Of course. Phone me.” Galanis shook her hand, and the office door closed behind him.

Monette rushed upstairs to her apartment and went straight to her talking grimoire Spellingra, a huge book of spells she had inherited from her witch great aunt. The book lay open on its stand, absorbing the moist, diffused sunlight from the window.

“Hello, Spellingra.” Monette tapped a finger on the book in greeting and outlined her problem.

“Searching for a Greek corpse.” Spellingra chortled. A bunch of its pages rose up defiantly and flopped against each other, as if applauding.

“Searching for a map and a document,” Monette shot back. “And he is willing to pay a bonus. I need a search spell.”

“Thirsty,” said Spellingra. One of its empty pages snapped up suddenly, its sharp edge slicing a shallow cut on Monette’s palm before she could react.

“You sneak!” Monette squeaked and snatched her injured hand away. “You should’ve asked.” Grumbling about the impudence of bloodthirsty spell books, she smeared the blood from the cut on the waiting page.

The page made a slurping sound, and the blood disappeared. “More fun this way,” said Spellingra. Its pages riffed rapidly, as if a strong wind browsed them, until everything stilled.

Monette read the spells on the open pages. When she came to the last one, she grinned.

“Yes! Thank you, Spellingra. Just what I needed.”

She called the client the next morning to meet in the afternoon. Then she went to the nearest dollar store and bought a paper kite and a set of colored paper ribbons. After slavishly copying the complex diagram of the search spell from Spellingra onto the kite, she glued on two ribbons, blue and red, as the kite’s double tails.

When Galanis came through the door, even before they signed the contract, she grilled him on the most important issue.

“You saw the documents and the map, I assume?”

“Of course. Many times.”

“I need words included in either. As many exact words as you can remember. I have to write them down in my search spell.”

“Doesn’t matter. As long as the spelling is correct. Write them down in random order.” She pushed a sheet of paper towards him and copied over twenty words he had written onto the ribbons attached to the kite.

“Let’s go,” she said as soon as they signed the contract. “We’ll take my car.”

Outside, she blew her magic at the kite to activate the spell and sent it into the sky. “Search,” she ordered.

The kite soared and headed east. She followed in the car, her magical strings tying her to the kite stronger than any physical string could be.

The kite’s first stop was the Vancouver Public Library. “Of course,” Monette said with chuckle and sent a new pulse of magic to the kite. “Search again, darling.”

The kite’s second stop was a cemetery. It came down to rest on a temporary wooden marker atop a fresh grave.

“Your documents are here,” Monette said happily. As always, a well-executed spell filled her with elation. “I’ll write you a report when I get home. You could take it to the judge as proof.”

“A kite,” said Galanis, eyeing the kite with interest.

“Paper magic,” Monette corrected primly. “Like a magic Google. I’ll have to fix my website to include a percentage in cases like yours. For the next time.”