The story first appeared on this blog in Oct 2015

“I want this painting.” The American pointed at Carmela’s copy on the easel. He had roamed Francisco Goya’s studio for an hour before finally making his selection, and it wasn’t a Goya’s painting.

“Uhm,” Carmela dithered. “The painting is not ready yet and not signed. Senor Goya—”

“I’m prepared to pay handsomely,” the American said and named his price. “I think it’s ready.” He patted his big belly smugly. “I like it the way it is.”

Carmela gulped. For this much money, she could pay all her debts and hire a day nurse for her grandpa. She could buy a decent house too, so her grandpa could spend his last days in comfort instead of dying on a cold pallet in their dingy hovel. Could she sell her painting as her master’s?

Would it be a forgery, if she signed the painting by her master’s name? What would happen, if Francisco or someone else found out? Would they send her to prison? Despite the balmy weather outside the studio, she felt cold, and her palms turned clammy.

“My ship sails in two days, but I’ll be back tomorrow. I want to see Senor Goya,” the American said.

“Of course,” Carmela murmured. She had a way to grant his wishes and sell her painting, if only she dared. Was the money and her grandpa’s comfort worth doing what she contemplated? She shivered as she watched the American sauntering out of the studio.

Locking the door after him, she pulled out her Velazar medallion, the legacy of her late sorceress grandmother. The imp Velazar, tied to the medallion, was bound to grant her wishes. She had only asked him once, several years ago, when she was young and stupid, and the price she had paid then hadn’t been too steep, although her grandmother had always maintained that the imp was sneaky. What would Velazar demand now in exchange for granting this wish?

Carmela glanced out the window, but the American had already left, and nobody was lurking there, witnessing her folly. Good. She took a pen knife, pricked her finger, and smeared a drop of blood on the medallion’s cloudy face. The crystal absorbed her blood with a loud slurp, and the surface of the medallion cleared to translucent, sparkly opal. She felt a lurch, and Velazar materialized in front of her in all his glory: the big brown gazelle’s eyes, the cloven hooves, the curving white horns among lush dark curls, and the thumping tail.

“What is your wish, Mistress?” Velazar smirked. “Money? A nice young senor falling in love with you?”

“No. I wish you to impersonate Francisco Goya tomorrow for the American?” she said and picked up her palette. “He wants to buy this painting. Francisco has already sold his Majas on a Balcony, but the American doesn’t want anything else. He can’t tell the difference between the master and me. He thinks it’s Goya.”

“Impersonate…” Velazar said faintly. “If anyone finds out, they’ll put you in prison. And me too. I don’t do well behind iron bars.”

“Nobody will find out,” Carmela said firmly, projecting reassurance she didn’t feel. “I’ll sign it with the master’s name.” She touched the golden lace on the painting with the tiniest of her brushes and smiled at the result. “Damn, I’m good. Look at those flounces. Francisco could never do details.”

“You want me to put on an illusion?” Velazar swished his tail.

“Yes. And I want you to lie. Tell the American that you—that’s Goya—promised this painting to the royal family. If they found out that he sold it, there could be repercussions. The American can’t display this painting until the master died.”

“Yes, he would. He looked at the painting as if he wanted to devour it.”

“Why don’t you sell it as your own then?”

“Nobody would pay the same price for mine as for Goya’s,” Carmela said gloomily. “I need the money, Velazar. My grandpa is dying. He needs a nurse, and we both need a house.”

“Then split the money with me.”

“You? Why do you need money?” She thought he would demand a year of her life or her blood or something equally gross and painful. She was prepared to bargain.

“I want to become a matador. I need a costume.”

Carmela couldn’t help herself; she giggled. “You a matador? You have horns and a tail.” She put the finishing touch on Goya’s signature and stepped back, eyeing her handiwork. “They’ll mistake you for a bull.”

Carmela blinked and looked at the imp closer. Was he lonely?

He didn’t meet her gaze. He wandered around the studio, his hooves clacking on the wooden floor.

“I can help you start your own studio,” he said without looking at her. “Sell your own paintings.”

“If I let you stay out of the medallion?” Her grandmother was right: he was sneaky, but what would be the harm? “Maybe,” she said finally.

He whirled to face her, his big eyes hopeful, his tail thrumming.

“We’ll do it year by year” she said. “Once a year, I’ll call you, and you’ll come, and we’ll negotiate for the next year. You’ll owe me a wish a year. And this year, you’ll impersonate Francisco Goya. Deal?”

~~~~~~~~~~~~~~~~~~~~~~~~~~~
This story is about the famous painting Majas on a Balcony by Francisco Goya. There are two known versions of the painting, one in a private collection, another at the Met in New York. Until recently, they were considered two variations of the same painting and attributed to the same artist, but lately, the opinion of most expects has undergone a transformation. Now they think that the Met version might be a forgery, or perhaps a copy by another artist.

Goya’s Majas on a Balcony at the Met 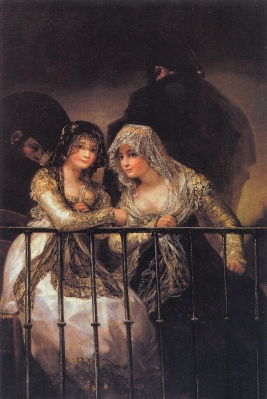 Goya’s original Majas on a Balcony

TIME TO REGISTER TO VOTE