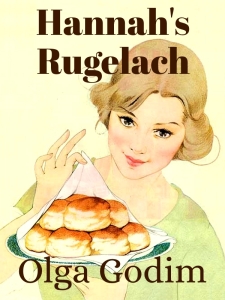 “Good morning, Hannah.” Mrs. Goldberg, the owner of the cafeteria, sailed into the kitchen.

“Good morning,” Hannah echoed. “The first batch of rugelach will be ready in half an hour.”

“Good. As soon as you put it in the oven, have some breakfast. I made coffee. You’re still too thin.”

“I swear, your smile leaks into the cookies,” Mrs. Goldberg grumbled. “Must be a secret ingredient. Everyone wants to buy your rugelach.”

Hanna didn’t comment, although her lips twitched. She was glad people liked her baking. She felt exceedingly lucky to be among them, to have survived the horror of the camp, to get the American visa. Lucky that nobody touched her anymore, no dirty German hands or repulsive lips. No derisive sneers of her fellow prisoners either. Yes, she had done what she could to survive. She had been the camp slut. She endured the filth and the everyday rapes, while her barrack mates kept their dignity and perished. She had given up her pride in exchange for her life and she wasn’t sorry. Her pride or her body didn’t matter. What mattered were her soul and her grandmother’s baking recipes, the rugelach recipes that made everyone coming to the cafeteria happy.

Hannah shook off her gloom, pulled the last batch out of the oven, and went to the dining room to fill the glass domes behind the counter with fresh rugelach.

“Miss, could I have a refill of coffee and a blueberry rugelach,” a man at the corner table asked. Dressed in an expensive suit, with his hair thinning despite his relative youth, he looked like a lawyer or doctor. He also looked a bit like Rafe, her sweetheart before the war. Rafe adored her rugelach too.

“Of course, sir.” Hannah smiled at him and picked up his cup.

Still holding his empty cup, she peered at him. Oh, no! A cold fist squeezed her heart. He didn’t look like Rafe. He was Rafe. Her hands started shaking. Before she dropped the cup, she lowered it carefully on the table.

“You’re alive. I looked for you after the war. I wrote tons of letters but I couldn’t find you. Hannah, beloved.” He surged to his feet, overturning a chair in his haste to get to her, and opened his arms wide.

Wretched, Hannah backed away, her palms out, warding him off. “Rafe, no.” Her mouth felt dry, and her head spun. She didn’t have words except for his precious name but she knew she couldn’t allow him to touch her. Frantically, she shook her head and retreated towards the kitchen.

“Hannah, wait. What’s wrong?” He caught her arm before she could escape. “Hannah, talk to me. Why are you running? I missed you so much.” Still holding her arm, he steered her into the kitchen. “I never stopped loving you. I searched and searched—”

“I can’t, Rafe,” she interrupted miserably. “We’re different people now. We were very young when we kissed and made promises. Your family left. Mine didn’t. They’re all dead. I spent two years in that terrible camp. I survived, but the price was high.”

“I know. I’m a doctor. I have patients who survived the camps. I’ll do all I can to help you. Don’t push me away. If I knew what this war would bring, I’d never have left you behind. I didn’t know. I was young and stupid, but life granted us a second chance. Please, let’s try again.”

She shook her head.

“Then why? I’m not married either. I’ve met many women, but each was lacking compared to you.”

What could she say? In the camp, she often shut her eyes and imagined his sweet face, while the German guards defiled her body. He was her refuge, her shining star in the end of the dark and fetid tunnel. Her hope that he was alive had kept her clinging to life too. But she was soiled for him. She had been immured in slime for two endless years. She could never wash the muck off. He didn’t deserve the Nazis’ leftovers.

She closed her eyes and told him the truth. At some point in her recital, his hand fell away from her arm. Of course, he was disgusted. Expecting to see his retreating back, she lifted her eyelids.

He stood facing her, his eyes full of tears. “Hannah,” he said. “I have been coming to this cafe for the last two years, ever since one of my colleagues mentioned your rugelach. I love them. Every bite reminded me of you. I always loved your rugelach, remember? I should’ve known it was you. How come I didn’t know? It must be fate.”

She was mute, her throat closed.

He kept on talking. “What happened in the camp was… not about us, Hannah. It was… it is a war wound. You’re wounded, but I’m a doctor. I treat wounds. Let me treat yours. Let me help you heal. Please. I love you. And I know you love me too. You said it yourself: thinking of me let you survive.” 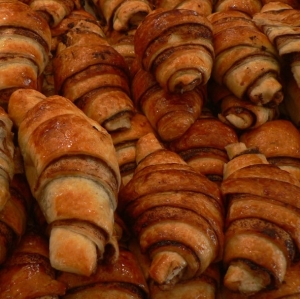 Did she say that? Yes, she did.

He smiled gently—the smile she remembered so well. “You can teach me to bake rugelach.”

“No!” Hannah blurted. “You tried once and ruined the batch.” She shivered. “It might take a long time to heal this wound.”

“As long as for me to learn baking?”

He opened his arms again, and this time, Hannah stepped into his embrace. Maybe she could teach him to bake after all.